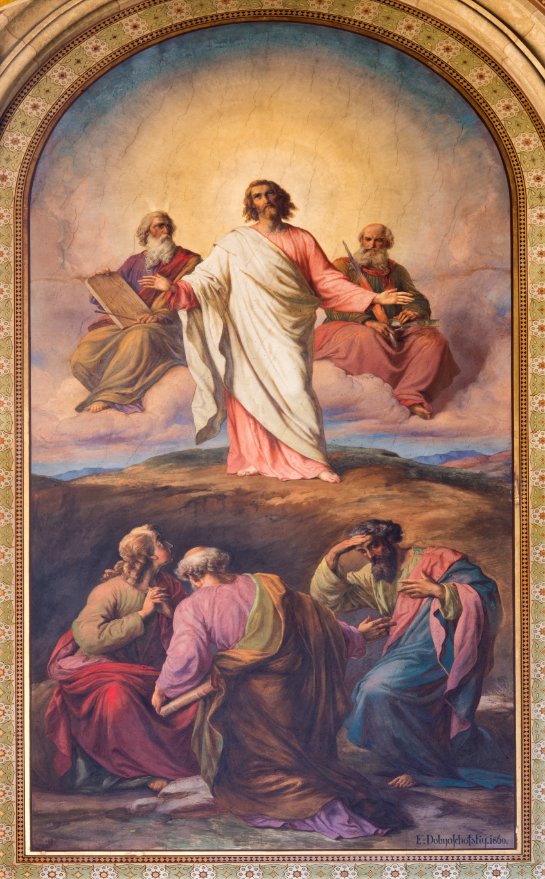 “What sorrow awaits my rebellious children,”
says the Lord.
“You make plans that are contrary to mine.
You make alliances not directed by my Spirit,
thus piling up your sins.~ Isaiah 30:1

The prophets of Israel were tasked to be mediators of God’s covenant to the people and their kings. Because of Israel’s rebellion, the true prophets were constantly trying to warn of the pending disaster that was coming if they continued to break God’s laws.

The Sovereign Lord showed me a vision. I saw him preparing to send a vast swarm of locusts over the land. This was after the king’s share had been harvested from the fields and as the main crop was coming up. In my vision the locusts ate every green plant in sight. Then I said, “O Sovereign Lord, please forgive us or we will not survive, for Israel is so small.” So the Lord relented from this plan. “I will not do it,” He said. ~ Amos 7:1-6

As an expression of God’s grace, the prophets, who were empowered by the Holy Spirit, would communicate the future hope God would bring after the judgement for their rebellion. Although the prophets weren’t exactly neutral parties, they would also represent the people’s response by way of intercession to God.

Long ago God spoke many times and in many ways to our ancestors through the prophets. And now in these final days, he has spoken to us through his Son. God promised everything to the Son as an inheritance, and through the Son he created the universe. The Son radiates God’s own glory and expresses the very character of God, and he sustains everything by the mighty power of his command. When he had cleansed us from our sins, he sat down in the place of honor at the right hand of the majestic God in heaven. ~ Hebrews 1:1-3

In the past God used prophets to reveal Himself to the world. Today we have God’s Word bringing us Christ’s message of judgement to those who refuse to repent of their sins.  But thankfully, God’s Word also points us to freedom from the burden of sin available to us in Jesus Christ the ultimate prophet and intercessor to our heavenly Father.

“Without God’s law and grace there is no opportunity for true freedom!”

Be blessed by this beautiful worship song by Bethel Music.

A Time to Advance
by Chuck D. Pierce

Secrets to Exceptional Living: Transforming Your Life Through the Fruit of the Spirit
by Joyce Meyer

Walking in the Fruit of the Spirit: Releasing the Nature and Power of God in Your Life
by Gloria Copeland

Do It Afraid: Embracing Courage in the Face of Fear
by Joyce Meyer

Fruits and Gifts of the Spirit
by Thomas Keating

Daily Readings from The Prayer of Protection: 90 Devotions for Living Fearlessly
by Joseph Prince

A Shepherd Looks at Psalm 23
by W. Phillip Keller

Finding the Monk Within: Great Monastic Values for Today
by Edward C. Sellner

Blessed in the Darkness: How All Things Are Working for Your Good
by Joel Osteen

Unshakeable Trust: Find the Joy of Trusting God at All Times, in All Things
by Joyce Meyer

The Plant Paradox: The Hidden Dangers in "Healthy" Foods That Cause Disease and Weight Gain
by Steven R. Gundry

Fat for Fuel: A Revolutionary Diet to Combat Cancer, Boost Brain Power, and Increase Your Energy
by Joseph Mercola

Grace: More Than We Deserve, Greater Than We Imagine
by Max Lucado

Dark Nights of the Soul: A Guide to Finding Your Way Through Life's Ordeals
by Thomas Moore

A Return to Love: Reflections on the Principles of "A Course in Miracles"
by Marianne Williamson

The Joy of Cooking
by Irma S. Rombauer

I Can See Clearly Now
by Wayne W. Dyer

Fixing My Eyes on Jesus: Daily Moments in His Word
by Anne Graham Lotz

A Spring Within Us: A Book of Daily Meditations
by Richard Rohr

Lead with Humility: 12 Leadership Lessons from Pope Francis
by Jeffrey A. Krames

The Dark Night of the Soul: A Psychiatrist Explores the Connection Between Darkness and Spiritual Growth
by Gerald G. May

The Pursuit of God: The Human Thirst for the Divine
by A.W. Tozer

Addiction and Grace: Love and Spirituality in the Healing of Addictions
by Gerald G. May

The New Inductive Study Bible: Discovering the Truth For Yourself -New American Standard Version
by Anonymous

Thrive: The Third Metric to Redefining Success and Creating a Life of Well-Being, Wisdom, and Wonder
by Arianna Huffington

Take Your Life Back: How to Stop Letting the Past and Other People Control You
by Stephen Arterburn

Jesus Calling: Enjoying Peace in His Presence
by Sarah Young

The Seat of the Soul
by Gary Zukav

The Divine Dance: The Trinity and Your Transformation
by Richard Rohr

Proverbs For Recovery: Meditations For Strength And Wisdom
by Barbara Stephens

Following the Path: The Search for a Life of Passion, Purpose, and Joy
by Joan D. Chittister

How to Be Here: A Guide to Creating a Life Worth Living
by Rob Bell

Yoga and the Twelve-Step Path
by Kyczy Hawk

How to Be a Monastic and Not Leave Your Day Job: An Invitation to Oblate Life
by Benet Tvedten

Everything Belongs: The Gift of Contemplative Prayer
by Richard Rohr

As Bill Sees It
by Alcoholics Anonymous

Breathing Under Water Companion Journal: Spirituality and the Twelve Steps
by Richard Rohr

The Elements of Style
by William Strunk Jr.

Let Us Pray
by Watchman Nee

Way Of The Master
by Ray Comfort

Words of Wisdom for Women at the Well: Quenching Your Heart's Thirst for Love and Intimacy
by Shannon Ethridge

The Innocent Man
by John Grisham

Boundaries: When to Say Yes, How to Say No, to Take Control of Your Life
by Henry Cloud

Problems, God's Presence, and Prayer: Experience the Joy of a Successful Christian Life
by Michael Wells

"I'm Not Good Enough"...and Other Lies Women Tell Themselves
by Sharon Jaynes

Regret-Free Living: Hope for Past Mistakes and Freedom from Unhealthy Patterns
by Stephen Arterburn

The Encyclopedia of Country Living
by Carla Emery

The Frogs and Toads of North America: A Comprehensive Guide to Their Identification,Behavior, and Calls
by Lang Elliott

The Christian Zombie Killers Handbook: Slaying the Living Dead Within
by Jeff Kinley

Sexperiment: 7 Days to Lasting Intimacy with Your Spouse
by Ed B. Young

The New Jerusalem Bible
by Anonymous

Writers on Writing: Top Christian Authors Share Their Secrets for Getting Published
by Wesleyan Publisher House

Real Marriage: The Truth About Sex, Friendship, and Life Together
by Mark Driscoll

The Circle Maker: Praying Circles Around Your Biggest Dreams and Greatest Fears
by Mark Batterson

Unglued: Making Wise Choices in the Midst of Raw Emotions
by Lysa TerKeurst

Get Out of That Pit: Straight Talk about God's Deliverance
by Beth Moore

The Spirit of the Liturgy
by Benedict XVI