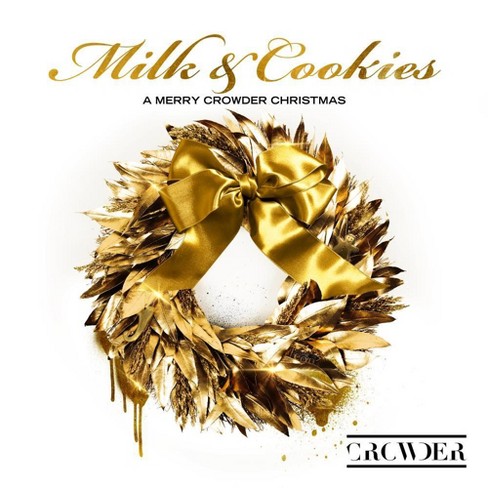 3x GRAMMY-nominated, genre-defying artist Crowder dropped Milk & Cookies: A Merry Crowder Christmas on October 21st in time to embrace the full holiday season. The album includes songs that touch on the thanksgiving spirit as well as Christmas all wrapped up in a beautiful gold ribbon.

It’s an album you could put on with the whole family around and make everyone happy at some point. There’s playful songs for the young and young at heart, smooth jazz, bluegrass, pop, and orchestral rock to get everyone energized and in the Christmas spirit.

Check out the YouTube videos of my favorites from the album. Enjoy!

REACHING HURTING WOMEN MINISTRIES OFFERS FOUR THEMES FOR CONTEMPLATION EVERY MONTH OF THE YEAR. EACH OF THE FOUR POWER-PACKED THEMES ARE A 12-MONTH STUDY SERIES ASSIGNED TO A SPECIFIC FRIDAY OF EVERY MONTH. IN MONTHS WITH FIVE FRIDAYS I REVIEW TOUCHING INSPIRATIONAL MEDIA. 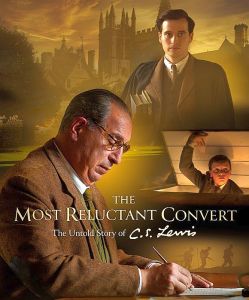 THE MOST RELUCTANT CONVERT: The Untold Story of C.S. Lewis

In this poignant autobiographical docudrama, Max McLean beautifully portrays C.S.Lewis narrating highlights of his distinguished life. The Most Reluctant Convert excellently relives the childhood, scholarly education and thought-provoking spiritual birth of one of the 20th Century’s well-known Christian apologists.

The Most Reluctant Convert begins in an unusual fashion with a behind-the-scenes look at the making of the movie. At first I was taken back by this being at the beginning. But after the film ended it made perfect sense.

In a one-on-one conversation with the audience, C.S. Lewis goes down memory lane sharing his remarkable life story. He recounts many life-changing events along with their captivating backstories.

The production of The Most Reluctant Convert stands out with its exquisite cinematography and spectacular period settings. Brilliantly filmed where C. S. Lewis grew up, lived, taught and worshipped makes you feel like you’ve stepped back in time with this incredible author/teacher/writer.

Enjoy this sneak peek below.

REACHING HURTING WOMEN MINISTRIES OFFERS FOUR THEMES FOR STUDY AND CONTEMPLATION EVERY MONTH OF THE YEAR. EACH OF THE FOUR POWER-PACKED THEMES ARE A 12-MONTH STUDY SERIES ASSIGNED TO A SPECIFIC FRIDAY OF EVERY MONTH. IN MONTHS WITH FIVE FRIDAYS I REVIEW TOUCHING, INSPIRATIONAL MUSIC, film and media.

In every month with five Fridays in 2021 I’ve been reviewing Christian music that has inspired and touched me. This third post in the Review Series is going to look at music from a little different angle. Instead of reviewing an album, I’m reviewing the recently released music documentary film: The Jesus Music. 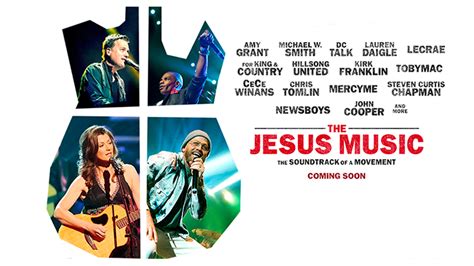 This first-of-its-kind documentary by brothers Andrew and Jon Erwin, the filmmakers behind I Can Only Imagine, Woodlawn and I Still Believe, chronicles how young hippie singers from the 1960’s and 1970’s had life-changing encounters with Jesus and became the foundation for what is known today as Contemporary Christian Music (CCM).

With the 2020 COVID-19 pandemic having locked down all the Christian artists at the same time, the Erwins had the perfect opportunity to have extended interviews with not only the industry’s top artists and bands, but the producers, managers and publishers of Christian magazines.

The filmmakers are careful to not put any one artist or group on a pedestal as some music documentaries are prone to do. Rather, they took a well-balanced look at painful issues in CCM industry.  The mainstream Christian church in the 1970’s wasn’t so quick to embrace this new type of music. Ministers were harsh critics of the new music thought to be from the devil.

Without stepping on toes, the movie gently addresses how past racial bias in America and in the church still continues even in the CCM industry today. The documentary film also carefully discusses the controversial issues the artists have dealt with being in the media and limelight: infidelity, divorce, pornography and substance abuse… among others. Revealing that just because they are Christians artists doesn’t prevent them from struggling with the same demons the world does. As Bill Gaither beautifully stated:

“These are human beings who have been gifted in a special kind of way, yet they’re trying to work through these earthly bodies, and sometimes they make mistakes.”

Over the last 50+ years CCM, has grown into a multimillion-dollar industry and has changed the landscape and culture of Christian music forever. The market segments of music that have spawned from this movement is nothing short of amazing. Not only the diversity of music genres within CCM: rock, rap, metal, gospel, blue grass, pop, and worship just to name a few.  There’s the incredible explosion of recording, radio, video, concerts, merchandise, and now film!

I really enjoyed seeing the old video footage from bands I hadn’t heard of before. The interviews were touching and the music and concert clips were well chosen. The Jesus Music is definitely worth going to the theater for and I highly recommend checking it out when it releases to streaming formats.

A Time to Advance
by Chuck D. Pierce

Secrets to Exceptional Living: Transforming Your Life Through the Fruit of the Spirit
by Joyce Meyer

Walking in the Fruit of the Spirit: Releasing the Nature and Power of God in Your Life
by Gloria Copeland

Do It Afraid: Embracing Courage in the Face of Fear
by Joyce Meyer

Fruits and Gifts of the Spirit
by Thomas Keating

Daily Readings from The Prayer of Protection: 90 Devotions for Living Fearlessly
by Joseph Prince

A Shepherd Looks at Psalm 23
by W. Phillip Keller

Finding the Monk Within: Great Monastic Values for Today
by Edward C. Sellner

Blessed in the Darkness: How All Things Are Working for Your Good
by Joel Osteen

Unshakeable Trust: Find the Joy of Trusting God at All Times, in All Things
by Joyce Meyer

The Plant Paradox: The Hidden Dangers in "Healthy" Foods That Cause Disease and Weight Gain
by Steven R. Gundry

Fat for Fuel: A Revolutionary Diet to Combat Cancer, Boost Brain Power, and Increase Your Energy
by Joseph Mercola

Grace: More Than We Deserve, Greater Than We Imagine
by Max Lucado

Dark Nights of the Soul: A Guide to Finding Your Way Through Life's Ordeals
by Thomas Moore

A Return to Love: Reflections on the Principles of "A Course in Miracles"
by Marianne Williamson

The Joy of Cooking
by Irma S. Rombauer

I Can See Clearly Now
by Wayne W. Dyer

Fixing My Eyes on Jesus: Daily Moments in His Word
by Anne Graham Lotz

A Spring Within Us: A Book of Daily Meditations
by Richard Rohr

Lead with Humility: 12 Leadership Lessons from Pope Francis
by Jeffrey A. Krames

The Dark Night of the Soul: A Psychiatrist Explores the Connection Between Darkness and Spiritual Growth
by Gerald G. May

The Pursuit of God: The Human Thirst for the Divine
by A.W. Tozer

Addiction and Grace: Love and Spirituality in the Healing of Addictions
by Gerald G. May

The New Inductive Study Bible: Discovering the Truth For Yourself -New American Standard Version
by Anonymous

Thrive: The Third Metric to Redefining Success and Creating a Life of Well-Being, Wisdom, and Wonder
by Arianna Huffington

Take Your Life Back: How to Stop Letting the Past and Other People Control You
by Stephen Arterburn

Jesus Calling: Enjoying Peace in His Presence
by Sarah Young

The Seat of the Soul
by Gary Zukav

The Divine Dance: The Trinity and Your Transformation
by Richard Rohr

Proverbs For Recovery: Meditations For Strength And Wisdom
by Barbara Stephens

Following the Path: The Search for a Life of Passion, Purpose, and Joy
by Joan D. Chittister

How to Be Here: A Guide to Creating a Life Worth Living
by Rob Bell

Yoga and the Twelve-Step Path
by Kyczy Hawk

How to Be a Monastic and Not Leave Your Day Job: An Invitation to Oblate Life
by Benet Tvedten

Everything Belongs: The Gift of Contemplative Prayer
by Richard Rohr

As Bill Sees It
by Alcoholics Anonymous

Breathing Under Water Companion Journal: Spirituality and the Twelve Steps
by Richard Rohr

The Elements of Style
by William Strunk Jr.

Let Us Pray
by Watchman Nee

Way Of The Master
by Ray Comfort

Words of Wisdom for Women at the Well: Quenching Your Heart's Thirst for Love and Intimacy
by Shannon Ethridge

The Innocent Man
by John Grisham

Boundaries: When to Say Yes, How to Say No, to Take Control of Your Life
by Henry Cloud

Problems, God's Presence, and Prayer: Experience the Joy of a Successful Christian Life
by Michael Wells

"I'm Not Good Enough"...and Other Lies Women Tell Themselves
by Sharon Jaynes

Regret-Free Living: Hope for Past Mistakes and Freedom from Unhealthy Patterns
by Stephen Arterburn

The Encyclopedia of Country Living
by Carla Emery

The Frogs and Toads of North America: A Comprehensive Guide to Their Identification,Behavior, and Calls
by Lang Elliott

The Christian Zombie Killers Handbook: Slaying the Living Dead Within
by Jeff Kinley

Sexperiment: 7 Days to Lasting Intimacy with Your Spouse
by Ed B. Young

The New Jerusalem Bible
by Anonymous

Writers on Writing: Top Christian Authors Share Their Secrets for Getting Published
by Wesleyan Publisher House

Real Marriage: The Truth About Sex, Friendship, and Life Together
by Mark Driscoll

The Circle Maker: Praying Circles Around Your Biggest Dreams and Greatest Fears
by Mark Batterson

Unglued: Making Wise Choices in the Midst of Raw Emotions
by Lysa TerKeurst

Get Out of That Pit: Straight Talk about God's Deliverance
by Beth Moore

The Spirit of the Liturgy
by Benedict XVI